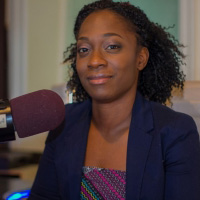 Camelia Guthrie began her career in broadcasting back in 2009, as a general assignment reporter for Nationwide News Network in her homeland Jamaica. A year later she was re-assigned as chief parliamentary and court reporter, covering major stories such as the Kern Spencer Light Bulb trial and the Mannatt –Dudus Commission of Enquiry.

Guthrie also served as News Anchor, Editor and Senior Producer for the Jamaica Information Service (JIS), where she covered the agriculture and fisheries, tourism and entertainment and health beats.

Her passion and dedication to health reporting saw her being selected as the 2011 American Cancer Society’s Global Journalist Fellow for Jamaica.

Guthrie has a long-standing love affair with words and storytelling which fuels her passion for writing and producing human-interest feature stories and documentaries on topics such as domestic abuse and human trafficking.

In her spare time Guthrie volunteers with the Canadian Breast Cancer Foundation; designs and sews a lot of the pieces she wears, crochets, blogs or just takes culinary adventures in the comfort of her kitchen.

She’s also an avid YouTube vlogger where she uses her channel to inspire, particularly women and young girls.

Guthrie joined the G98.7FM news team in February 2016 as a news and sports anchor and producer.