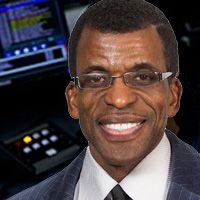 For over 10 years, Chris Hayles has been a familiar voice on radio stations in Toronto, including CHRY, AM1430 and CHIN Radio, where he worked as a DJ and radio journalist.

Hayles has had interviews with politicians and celebrities, such as Ontario Premier Dalton McGuinty, Former President of Guyana Bharrat Jagdeo and the late Jamaican folklorist, writer and educator, Louise Bennett-Coverley, to name a few.

Chris is also a talented performer, and is in high-demand as a Sammy Davis, Jr. impersonator. When in character, he captures the hearts of many as he sings some of Sammy’s famous songs such as “Candy Man, Old Black Magic, I’ve got To Be Me and Mr. Bo Jangles”.