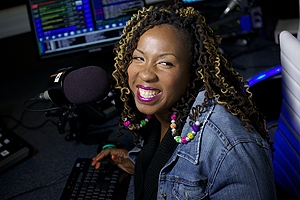 Born in Grenada and raised in Canada, Jemeni earned her stripes in her teens as the only female member of the country’s most popular Hip Hop show “The Powermove” on CKLN, eventually co-hosting and co-producing the show with DJX. At 19 she became the Music Director of the entire station and moved on to create a female-fronted hip hop show called “Droppin Dimez” with DJ Stach.

In the early part of her career, Jemeni cut her teeth in the field of music journalism doing radio and print interviews with Hip Hop artists like the late Notorious B.I.G., A Tribe Called Quest, WuTang Clan, Lil Kim, Redman and The Fugees. At the same time she was also becoming one of the city’s most popular spoken word artists and performance poets, sharing the stage with the likes of Erykah Badu, Jill Scott, Angie Stone, Michael Franti, and Les Nubiennes.

Her poetry has been published in various anthologies and periodicals, with one of her most critically-acclaimed poems, the politically charged “America Eats its Young”, published in the Def Jam Anthology “Bumrush the Page – A Def Poetry Jam”.

Jemeni has also delved into acting. She has appeared on Drop the Beat, Da Kink in My Hair, Queer as Folk, worked with Ving Rhames and Chazz Palminteri on the remake of Kojak, and had a recurring role on the Showtime Series Soul Food. Jemeni is a regular fixture on Muchmusic as a pop critic on the show “Video on Trial”, and a frank and funny commentator on CP24′s Sex Matters. She was also the poet laureate for CBC TV’s Play.

Between red carpets and poetry slams, she found time to play a pioneering role as one of the original radio personalities on one of Canada’s prominent radio station, where she kicked it for five years with stars like Justin Timberlake, Mariah Carey, Denzel Washington, 50 Cent, Janet Jackson and Jay-Z, while charming up to half a million listeners in Toronto each and every morning.

If that’s not enough, Jem was a fan favourite on MuchMusic’s breakout show Video on Trial and was a regular panelist on CP24′s Sex Matters talk show. She is an award-winning writer and poet who has also been known to hit a stage (Dinner Mint, The Vagina Monologues) or television screen (Da Kink, Soul Food, The Bridge) when the acting bug hits. When not working on her site nomoredatingdjs.com. she runs reading circles with Literature for Life and Women Moving Forward empowering young women in at-risk communities.

Jemeni’s latest offering is a cd collection of her various spoken word/music collaborations with artists around the globe appropriately titled…“Feature Trippin”.