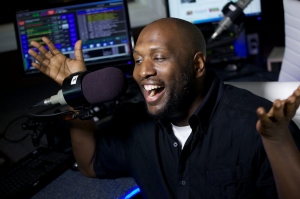 Mark Strong began his foray into the broadcasting and entertainment worlds with his participation in the Toronto’s Fresh Arts program in the early 90s (which was instrumental in developing the urban talent pool in the city, including Kardinal Offishall, Saukrates, Jully Black, and video director Little X).

After hosting Internet radio shows, Mark moved to commercial radio in 2001, and in a matter of months, advanced to the position of lead on-air personality and producer of the morning show, The Morning Rush on FLOW 93.5, a position he held for over four years.

As one of the country’s most in-demand voice over talents, Mark has been the live voice of The Juno Awards for the past six years, and has also voiced Canada’s Walk of Fame for the past five years. He has also been the warm-up talent for “Deal or No Deal” (for host Howie Mandel), “Are You Smarter than a Canadian 5th Grader” (for host Collin Mochrie) and for YTV’s “The Next Star Finale” shows in 2008 & 2009.

His transition to television was next on the agenda, and he secured the position of permanent host of NBAXL, a national NBA basketball/magazine show broadcast across Canada that exposes Mark’s energy from coast-to-coast by interviewing players though a basketball culture perspective.

His latest progression in the field has found him in the driver’s seat at the Toronto Argonauts and Toronto Raptors home games as in-stadium host and hype man.
Now, his return to radio has sparked the energy of the city once again. Back at the helm of Morning Radio in Toronto on G987fm, Strizzzy’s new and loyal audience has grown with him and this new impactful station. Bringing you a blend of old school/new school home for soul, groove, hip hop, R&B, Soca, Reggae all over a bed of Caribbean culture and flava .

A perfect blend to match his charismatic character.

As a dedicated family man, Strong works hard to be a positive role model in several communities. His persona has managed to captivate thousands of listeners and viewers with his humor, creative parodies, witty topics and commanding presence. He is always up for the challenge to push the creative envelope and there’s no telling where he’ll take it next.