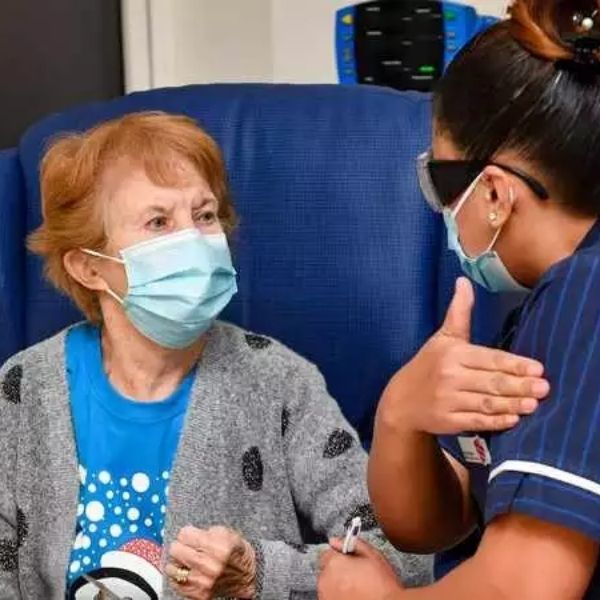 90-year-old Margaret Keenan from Britain is the first patient to receive the Covid-19 vaccine, developed by US drug maker Pfizer and Germany’s BioNTech. The vaccine debuted in Britain in early December and is the first fully tested vaccine in the world. It was administered on Tuesday at the University Hospital in Coventry, England. This marks a major step in the global battle against the pandemic and is confirmed by UK regulators as strongly protective against Covid-19 and appears to be safe. Britain will be one of the first countries to begin vaccinating its population starting with elderly people in homes and medical workers first in line.

British regulators leapt ahead of the United States to authorize the coronavirus vaccine which sparked controversy with the White House on whether Britain moved too hastily. This skepticism comes despite the concerns that the virus was killing approximately 1,500 Americans a day. Dr. Anthony Fauci, America’s leading infectious disease scientist was also among the skeptics who believed that the UK rushed the approval of the Pfizer-BioNTech Covid-19 vaccine. Fauci later apologized telling the BBC that there was a misunderstanding and that he had “great faith in both the scientific community and the regulatory community in the UK.”

The UK continues to move full force ahead as the first nation on the map to begin a mass inoculation campaign, beginning with the reveled 90-year-old Margaret Keenan who is a retired shop clerk from Northern Ireland. A very brave and relaxed Margaret stated that she felt so privileged to be the first person vaccinated against Covid-19 and was just so happy “to play a part on this historic day.” Her image was quickly circulated around the world and became the testament of a breakthrough in science. The global population is driven to applaud medical science for producing a vaccine to end a pandemic that has killed 1.5 million people worldwide.