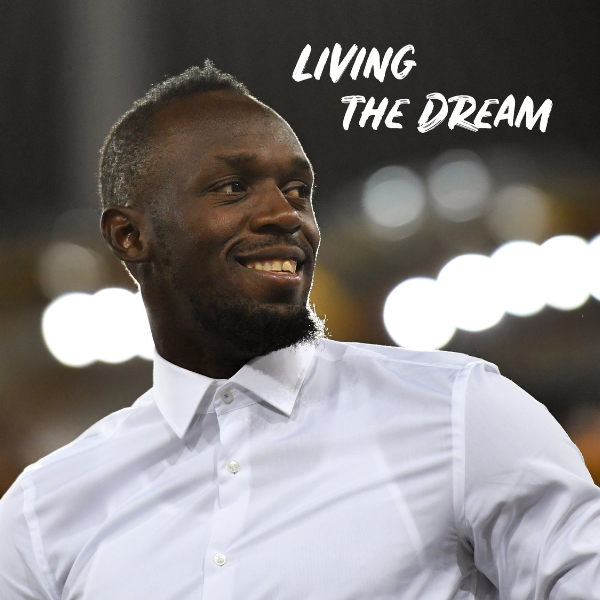 Track star and sprint legend Usain Bolt kickstarts the new year with a music video release called “Living the Dream.”  The official video was launched on January 2, 2021 and features the record-breaking athlete with his partner and manager Nugent ‘NJ’ Walker. The single is a clean and inspirational dancehall track that encourages determination, perseverance, and faith.

After a world class athletic career, his undefeated journey in the track and field arena positioned Bolt as one of the most successful sports persons in history. Usain is now using this platform to gain attention in the music industry, to inspire the youth to work hard towards their goals and to live their dream. The video comes a day after the single was made available on all social media and streaming platforms, such as Apple Music, iTunes and several local radio stations who have put the song on rotation. The well-produced video depicts the stories of young people who overcome hardships in humble beginnings and work towards becoming who they want to be in their respective fields. It showcases Bolt and Walker as their younger selves who gain major accomplishments through hard work and determination. The song begins with verbiage “Life is a journey, believe in yourself” and progresses to a motivational story that teaches the youth to “never give up.”

The song, distributed by Hapilos Entertainment, received 13k views within six (6) hours of being released on YouTube, and is drawing attention from fans across the world including the Caribbean, Africa, and India. This is not the first time that the runner dabbled in music. Bolt made His debut in the music industry in 2019 with the release of “Olympe Rose Riddim” collaborating with Jamaican artistes Chris Martin, Ding Dong, Dexta Daps, and others. He later partnered with Trinidadian group Ultimate Rejects on the Soca track remixed version “Energy to Burn” in 2020. The song promises a wave of energy as Carnival revelers wait patiently to chip down the bacchanal road with energy to burn.

With many feeling anxious about what the new year will bring, the fastest runner in the world has made a statement to his fans around the world. Through his video release “Living the Dream” he offers a hopeful and positive turn on the new year that has his fans on their toes, and dancing to their finish lines. BOLT!