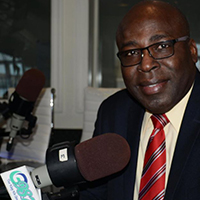 His passion for radio goes back to the mid -1970s when he got his first radio and tuned into
WQAM from Miami playing Top 40 Hits seemingly bouncing off the sugar cane filled valley
behind his home in Westmoreland Jamaica. He was hooked!

Combining his natural musical talent with his ability to instinctively select for various
audiences with his “double cassette” Sony player made him an instance favorite as the
resident DJ at many Fete at the University of the West Indies (UWI) in the mid-80s. On
arriving in Canada in the late 80s his common interest in the vocal harmonies of acapella
and radio lead to his long friendship with his former partner Fitzroy “Mr. G” Gordon from the
early 1990s. resulted in his early landed him a CHIN Radio AM1540 and 91.3FM hosting
the Dr. Love Show from 1999 to 2004.

An “Ole Skool” connoisseur and fervent believer in the power of music to empower,
educate and entice the senses, he punctuated his music with inspirational and evocative
enunciations stimulating the mind, body, and soul.

He was instrumental with Mr. Fitzroy Gordon in the twelve-year journey from 1999 to 2011
in the struggle to obtain the CRTC licence to launch G.98.7FM (the Greater Toronto’s only
true “Black” radio station) and is the a founding Director, Vice-President and CFO of
Intercity Broadcasting Network Inc. (G98.7FM)