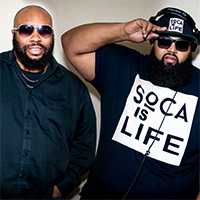 Award-winning, jet setter DJ Crew D’ENFORCAS is without a doubt one of the most influential tastemakers in the International Caribbean Music Scene. The Sound consists of two members: BASS LINE – the Founder, the Voice and one half of the production team, and MARLY – long standing member and Dancehall Specialist. Both members come from a Strong Musical Family Background.

D’Enforcas have toured all across Canada, The United States, Europe and The Caribbean performing alongside some of the biggest names in urban entertainment such as Beyonce, Lauryn Hill, D’Angelo, Ryan Leslie, Trey Songz, Ciara, Nas, Beenie Man, Ace Hood, Fat Man Scoop, Barrington Levy and more.

They also have helped to make Soca music mainstream and changed the landscape of Toronto’s Urban Nightlife Scene mastering the term “Resident Soca DJ”. D’Enforcas have been recognized internationally for producing official remixes for some of the biggest Soca artists in the World such as: Machel Montano, Bunji Garlin, Fay-ann Lyons, Iwer George, Umi Marcano, Shal Marshall and more.

In 2012, D’ENFORCAS received the honour of being asked to join the World’s BEST DJ Crew – THE HEAVY HITTERS FAMILY by the Legendary DJ ENUFF from New York (tour DJ of Notorious B.I.G); making them the first DJs in Canada & the first SOCA DJs in the world to receive this honour. But this is just the beginning for these talented dj’s; they are constantly looking to raise the level of Urban Entertainment with the ultimate mission of contributing to the growth and appreciation for SOCA music worldwide.