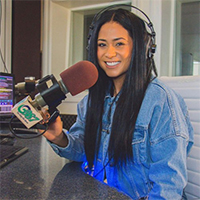 She is a trained dancer who got her start in entertainment dancing for the 2007-2009 Toronto Raptors Dance Pak. During her time on the team she was the youngest member. She was featured in NBA TV’s Making the Pak segment which followed her throughout her audition process. Following this, she danced alongside Demi Lovato and The Jonas Brothers in the 2010 Disney Hit Camp Rock 2: The Final Jam. She then caught the acting bug and was a lead actor in the 2011 sequel to You Got Served, titled: Beat the World, filmed in Berlin, Germany, Toronto and Rio de Janeiro, Brazil.

She has appeared in television series that have aired across North America and was the anthem singer for the National Basketball League during it’s 2013-2014 season. After attending the University of Toronto, Nikki enrolled at Seneca College and graduated with a post graduate certificate in Broadcast Journalism where she received one of five awards given upon graduation for being the “Best in Television”.

After graduation she worked in Dauphin, Manitoba as a radio personality.  She began as an evening announcer and after three months was promoted to the Midday Announcer position. Upon returning to Toronto, she completed her honours undergraduate degree at York University in Communication Studies. Nikki has returned to radio as the voice of the Afternoon Cruise here on G 98.7.

Tune in Saturday afternoons from 12-3 pm for entertainment updates, your weekend weather forecast and the hottest grooves in the city!