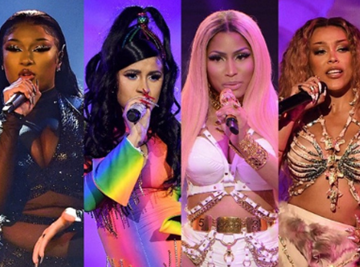 Female rappers have dominated the Hip Hop market in 2020 despite the cancellations of concerts and music festivals caused by the Coronavirus. Even without live performances to promote their music, the artistes used the internet and other fan-based music platforms to connect with their supporters and still topped the charts successfully. Among the celebrities who weathered the storm were Megan Thee Stallion, Cardi B, Nicki Minaj, and Doja Cat. While their stardom has induced some flak from their critics, the queens have found their strength as influencers and have used social media as a tool to raise social issues, educate on different perspectives, and to flaunt the power of a female in a male dominated society.

Unforgettable viral moments to remember where female rappers dominated communication channels and music platforms are many. In May, Doja Cat scored her No. 1 single “Say So” featuring Nicki Minaj. This resounding success marks the first time that two female rappers topped the Billboard Hot 100. The song received nods for record of the year, and best solo performance. Doja also received the Grammy nomination for best new artist and became the first-time Grammy nominee along with Megan Thee Stallion with four nominations.

Cardi B showed her lyrical prowess in her latest and most racy single WAP, released in August, featuring Megan Thee Stallion, and it debuted at the top of Hot 100. The song racked up 1 billion streams and made history on Spotify as the biggest hit for a female rapper. It made her the only female rap artist to achieve chart topping singles in two decades and the first female rapper to be named woman of the year at the Billboard Women in Music Awards. As it is, she has reached a significant milestone in her career and has made history in more ways than one.

Emboldened by their mastery of rap music, the rapper girls have captivated the hearts of many around the world. They speak on all experiences across the board and create scenes that compel listeners to identify with spectrums of gender and sexual innuendos. Their lyrics have spoken volumes, fueled by music popularized by artists in hip-hop, and have left a permanent mark in the world of rap dominated by women in the eventful year of 2020.