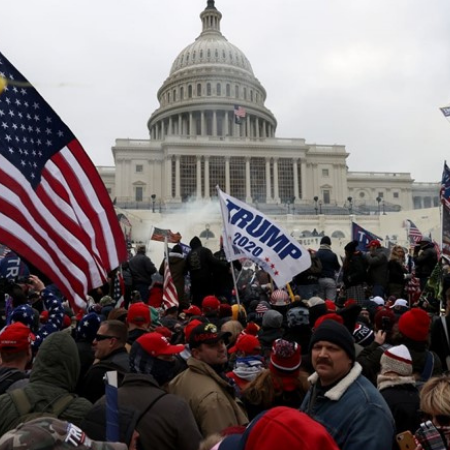 Hundreds of pro-Trump supporters breached security at the U.S. Capitol building in Washington, D.C. on Jan. 6, just minutes after the US Congress were engaged in the process of certifying the electoral college vote for President-elect Joe Biden.

Shortly after 1 p.m. ET, the rioters, many waving pro-Trump flags, pushed against the metal fences and bicycle rack barricades set up along the perimeter of the Capitol and tangled with police in full riot gear.

About 90 minutes later, rioters got into the Capitol building, which holds the chambers and offices of the House of Representatives and the Senate, by storming doors and breaking windows.

An officer told CNN that the Senate floor was cleared of rioters by 3:30 p.m. and the police were successfully moving the rioters away from the Senate wing and towards the Rotunda in the centre of the Capitol.

Prior to the breach, the US House of Representatives and the Senate were meeting to certify the Electoral College votes for President-elect Joe Biden. Biden won 306 electoral votes to Trump’s 232. Pro-Trump Republicans vowed to protest the election results of some states.

House Speaker Nancy Pelosi said lawmakers were resuming the counting of electoral votes in the evening of Jan. 6 after the Capitol was cleared of the pro-Trump occupiers.

Earlier in the day, Trump addressed thousands of his supporters at a rally outside the White House, where he continued his baseless claims of election fraud and a stolen election. He urged his supporters to march to the Capitol.

“We will not let them silence your voices,” Trump told the protesters.

After the Capitol was originally breached, Trump encouraged supporters in a tweet to “remain peaceful,” but he did not ask for them to go home until hours later when he shared a video on social media.

Mayor Muriel Bowser imposed a citywide curfew for the District of Columbia from 6 p.m. to 6 a.m.