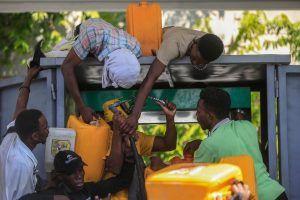 The United States government is urging American citizens to leave Haiti now while they can still get flights, as the Caribbean nation remains in crisis.

Fuel shortages, gang violence and political instability have intensified since the assassination of President Jovenel Moise in July.

In a security alert issued on Wednesday, the US Department of State urged Americans to carefully consider the risks of travelling to or remaining in Haiti in light of the current security situation and infrastructure challenges.

It said the United States Embassy is unlikely to be able to assist US citizens in Haiti with departure if commercial options become unavailable.

The Canadian government issued a similar warning, noting that while Haiti’s International Airport is still operational for now, it may be affected on short notice.